You are here: Home / Travel / A Journey through Beautiful Midtown Atlanta in Photos

Special thanks to Atlanta CVB for excellent Midtown Atlanta experiences!

Recently, I was lucky enough to spend a few days in Atlanta. I’ve travelled to a lot of the US, but the South is one part that I haven’t spent tons of time in. And I’d never been to Atlanta. So, as you can imagine, I was pretty excited to be there. We spent most of the time in Midtown Atlanta. 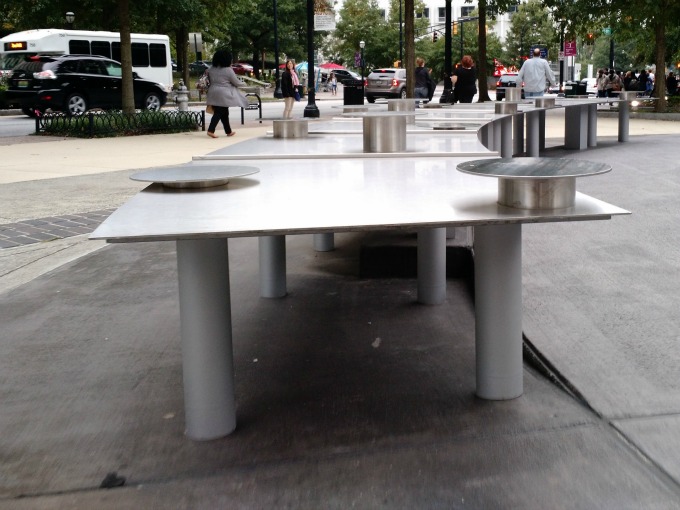 The first thing we did was go on an art walk with the founders of #WeLoveATL. #weloveatl has revolutionized Atlanta’s art scene, and is a huge proponent of finding beauty in the world around you. I am always up for an adventure, so I thought this sounded pretty awesome.  As we traipsed around Midtown Atlanta, discovering parts of the city that even locals tend to overlook, and learning some great photography tips, we really started to get a feel for the town. We visited places like The Woodruff Arts Center, which is the 3rd largest performing arts center in the United States, and Piedmont Park. 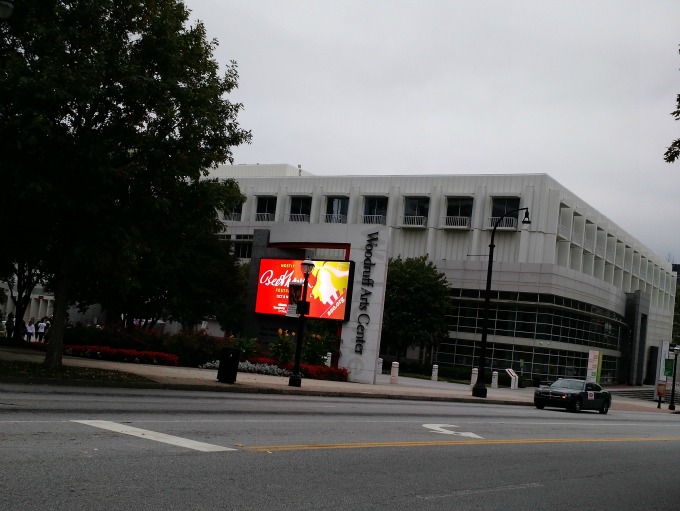 Woodruff Arts Center, nestled right in the center of Midtown Atlanta, houses the best of Atlanta’s performing arts.  It houses the Alliance Theater, which hosts live performances, Atlanta Symphony Orchestra, High Museum of Art, and Arts for Learning.  These are all among the most prestigious venues in the country.  The Woodruff also has an amazing public art display in their courtyard. 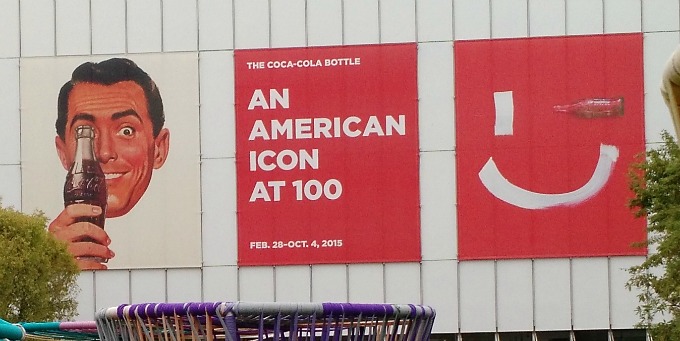 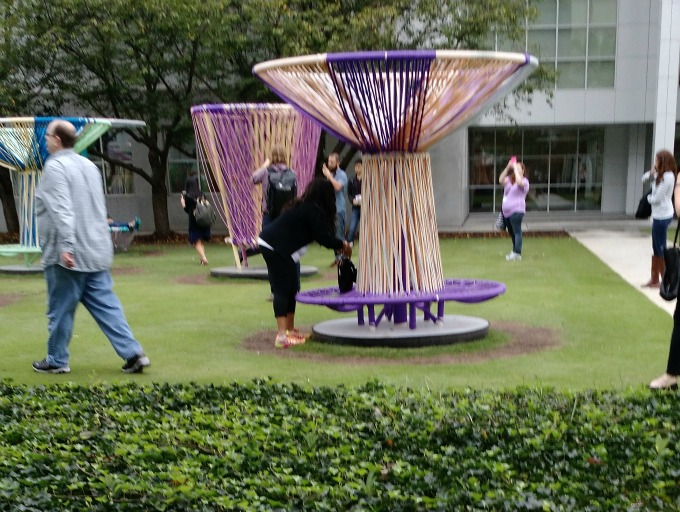 We happened upon these rope swings a few places in Midtown Atlanta.  They’re totally interactive, as you can sit and spin around on them.  And check out this sculpture.  It’s cool looking on it’s own. 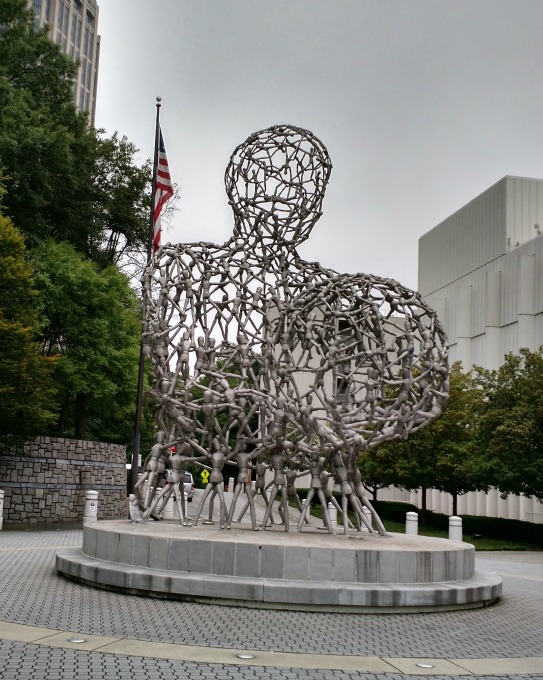 And then when you get close up, you can see it’s made of tons of artists dummies.  I never would have guessed that was the item used. 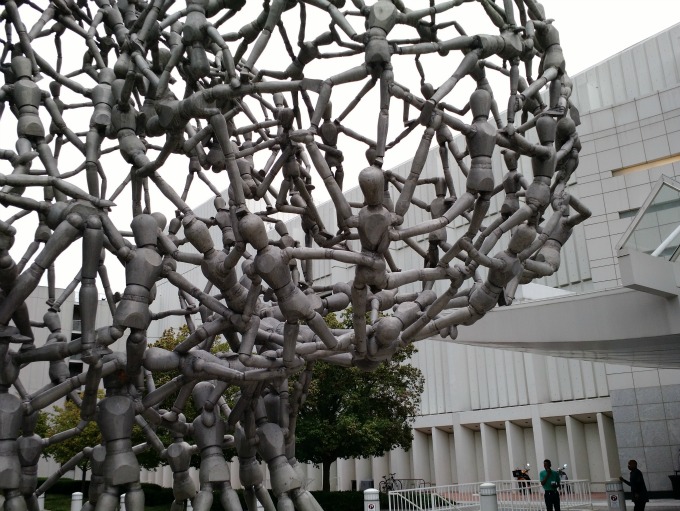 Midtown Atlanta had a lot of really great public art, along with a mix of new skyscrapers and classic architecture.  The dichotomy was quite striking.  You can see 1180 Peachtree (with the fins on top to the right) and Spire (center.)  These are two of the more famous buildings in the Southeast. 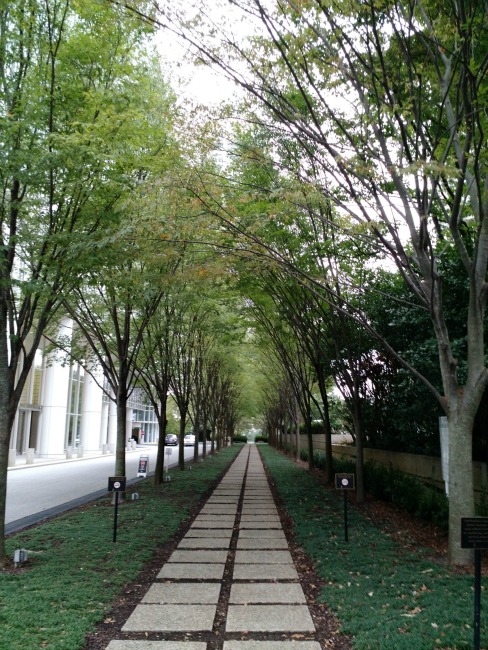 And you’ve heard about Atlanta traffic?  It’s no joke.  And it doesn’t matter if you have the right of way, if you’re a pedestrian watch out! We were almost run over a few times. 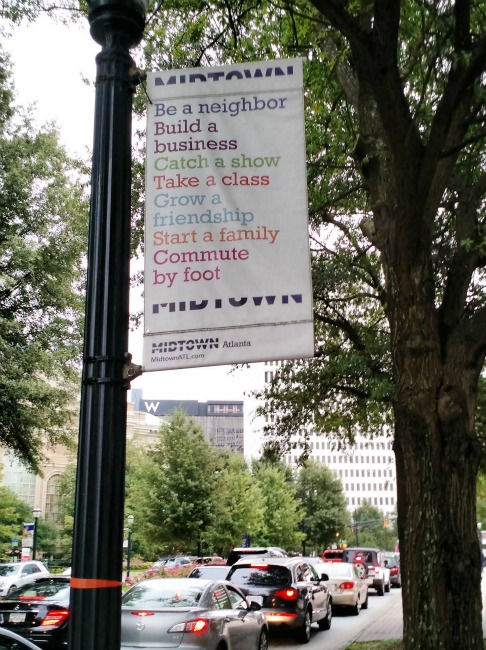 Later that first night, we had dinner at the Atlanta Botanical Gardens. It was the last night of the Bruce Munro art exhibit at the Atlanta Botanical Gardens, so we were able to see that, as well. We had great food from Restaurant Eugene, which is one of the premier restaurants in the South, let alone Atlanta. We actually had the proprietor, Linton Hopkins, and the executive chef, Brian Jones, cooking for us. That is a huge event! 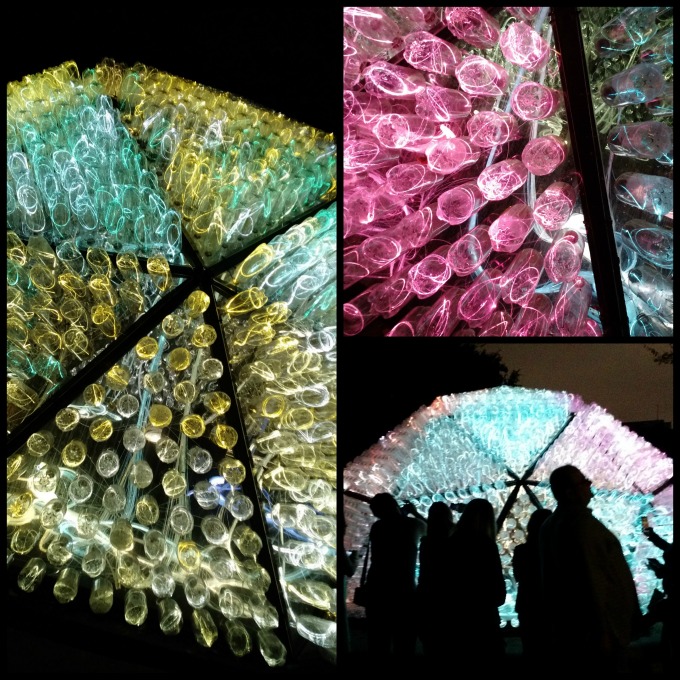 The Bruce Munro exhibit was pretty cool. The sculptures all lit up, and changed color. At first glance, it looks like they’re something really extravagant and difficult. However, once you got close, you could see that the dome was about a million miles of fiber optics and a ton of plastic bottles in a geodesic dome-type frame. I’m almost convinced that I could make that for my own house! Almost… 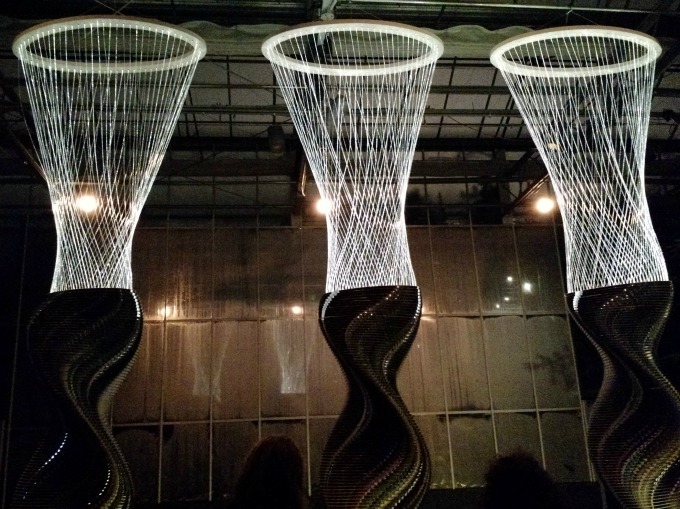 Scattered throughout the Atlanta Botanical Garden were other pieces of art like these giant sculptures that sort of look like basketball hoops.  There were also these lighted urchin-looking flowers in a room that was otherwise just about pitch black.  That made for a slightly spooky effect. 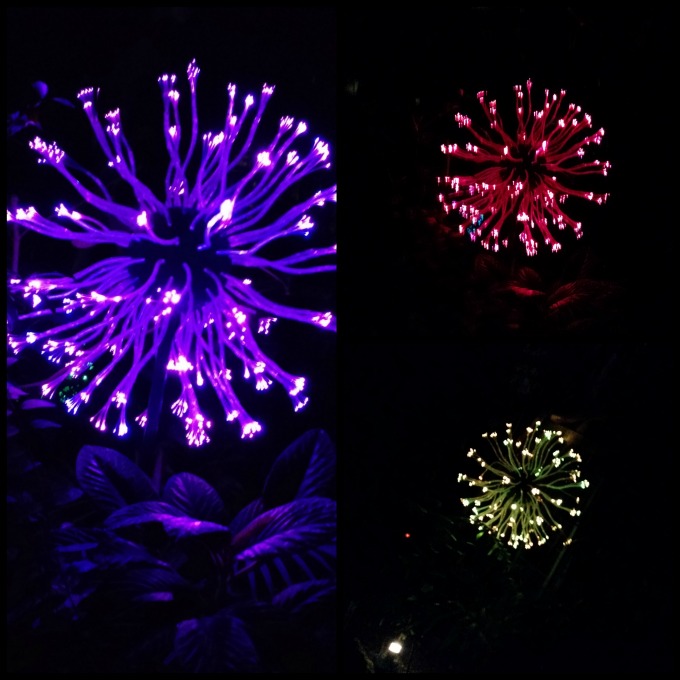 On the second day, we spent part of the day visiting attractions – more on that to come! However, that evening we ventured over to the King Plow Arts Center. This is an old plow factory that’s been transformed into an event space. It was here that we had another amazing tasting of foods from three of Atlanta’s great restaurants – Ecco, Lure, and South City Kitchen. These restaurants are all owned by the same company, Fifth Group, and have been mainstays in Atlanta’s food scene for years. We also had desserts made from their in-house pastry teams. Yum yum! Oh, and say “HEYYYY!!!” to Pam from Simply Southern Mom! 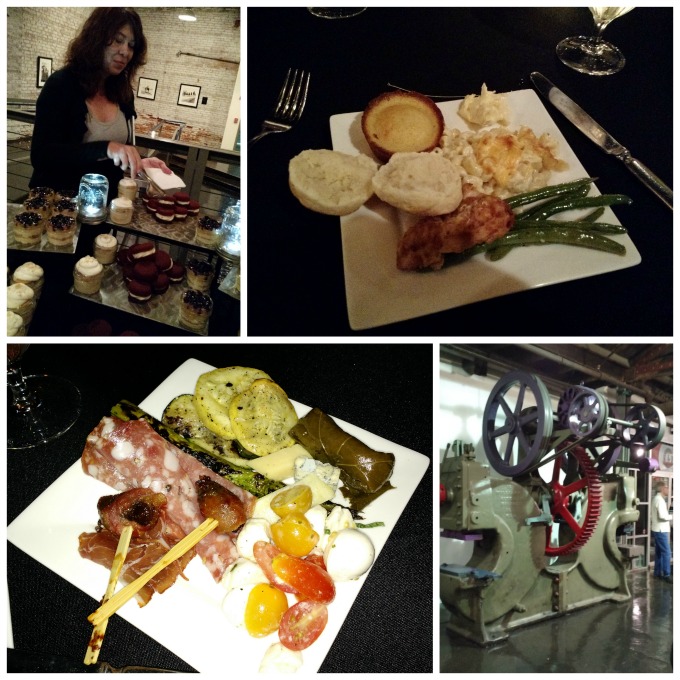 There’s a ton of stuff to do in Midtown Atlanta alone, and this is barely scratching the surface of it. 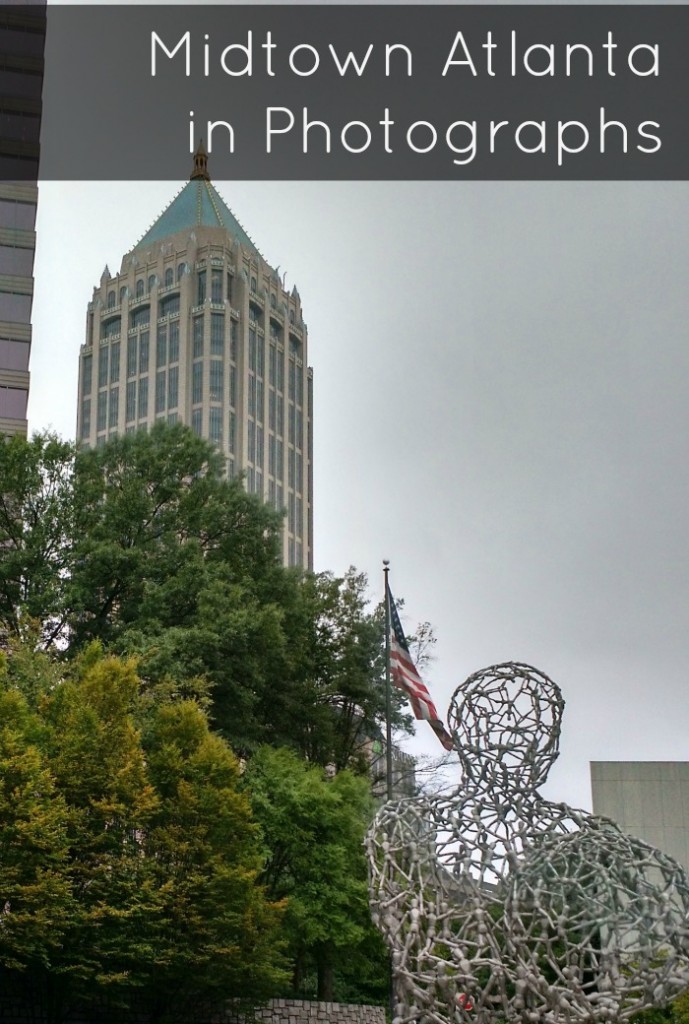